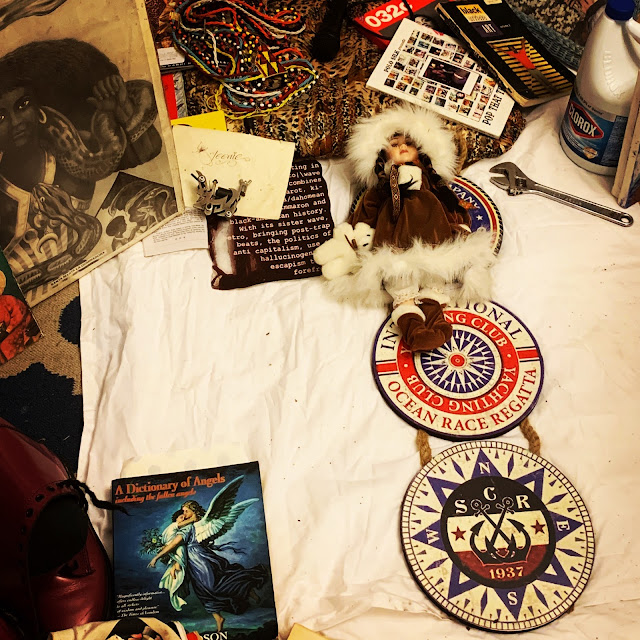 “Come on,” I said, and lead the man whose voice had broken the dark and the woman he had with him to the back of the store.

The woman was young and quiet, too fucking quiet. She was wearing a pair of men’s jean shorts and a sports bra. Not fat, but her middle was loose and fleshy. She had this wide-eyed look of perpetual surprise. I gave them what they needed and tried not to look her in the face.

Back in front the store this girl was talking on a battered cell phone. Arguing with someone about shoe insoles and washing powder. She was a real pretty girl, with hair that looked like if she uncoiled it from the nape of her neck, would probably reach her butt. Once she walked inside the store, she hung up on whoever she was talking to. I watched the way the black and white stripes of her leggings moved across her legs, as she walked around the store all lazy-like, picking shit up, looking at it a long time, then putting it down. She’s stared at two boxes of Jiffy cornbread mix, like it made a difference.

I went inside to holler at Fadi for a second. Maybe get a little closer to her too. “I’m done. You know her?” I asked and motioned in the girl’s direction.

“Who? Panda? Yeah. She works across the street at the club. You never seen her in there?”

I glanced in her direction. Her eyes were red. I figured she had been smoking, but she could have been crying or both.

“How much?” she asked Fadi, holding up a toilet scrubber.
Fadi made a motion that suggested she look at the sticker. “It’s not marked, must be free.”

She walked up to the counter with a basket full of things. Toothbrush, ten boxes of cornbread mix, toilet-scrubber, detergent, a pack of sponge rollers, Lysol, and hand sanitizer.

“How’s it going over there?” Fadi nodded his head in the direction of the club across the street.

“You work over at Bottoms?” I asked. “How come I never seen you in there?”

“I’m only there a couple nights. But I know him,” she flung her hand in Fadi’s direction and laughed. “But I don’t know you. What’s your name?”

Panda giggled.
“No, but I think you’re cute,” Panda reached out and gave a few of my dreads a light tug.

I should have said something back. Anything. Squeezed the side of her waist. She would have liked that. Instead, I just stood there.
Panda stared at me like she was reading my mind. My eyes followed her out the door.

“I not going to lie, man,” I said, as I watched her stripes move through the glass. “I like lil’ one’s style.”

“Slow your roll, Co. You know that girl Peanutt? That’s her sister. They’re trouble.” Fadi laughed, but I could tell he meant it.

“That’s exactly what I’m looking for, dog” I answered.

I meant that too.

The power was out. My Paw was out of town and forgot to pay the light bill. I had the money to turn the lights back on but fuck it.  I was about to cop an apartment and some real work of my own. I could sleep without lights for a couple days. I lit all the candles I kept on my drawing table. I needed to clean myself. I smelled like outside. Like a puppy dog, my mama would have said if she could smell me. The hot water from the bathroom steamed up my entire room. The tiny bathroom connected to my bedroom reminded me of a cell. Once in the shower, the sweat started to pour. I had to sit down to keep from passing out.

The water rushed over my head and Peanutt popped up in my mind when I closed my eyes. She worked at Bottoms from time to time and always needed two things when she saw me. That shit to get her up, before work, and that shit to get her back down, once she was home. I didn’t know she had a sister. But I was gonna pretend like I still didn’t. I had messed around with her a few times before I realized how bad off, she was. Then there was Kalo. My baby girl. All I could do was lie to her about it all.

Damn near two in the morning, and still too hot to sleep. My Pa was trying to wait me out, make me pay the bill, probably, but whatever. He had been doing this shit since I was ten years old. Leaving and returning with little warning. I called Fadi to see if he was done at Habibti’s and felt like dipping through Bottoms. I was really trying to see that girl. When he pulled up, I was happier for the air conditioner than the blunt he passed to me.

“Xavier back from Miami yet?”

“Yep,” Fadi said. “I talked to him earlier. He said tomorrow and we’ll be all good.”

Inside Bottoms, we saw each other at the same time. Panda was leaning up against the bar talking into the side of this man’s neck. She stood in place, but moved all the loose flesh on her body, which was just enough for a good show. The man slid money in the little bag she wore around her waist. She looked past him, straight at me. Her hair was all hanging down looking like falling water. Her snow-white top and bottom were slashed all over the place, nipples poked out the holes in her top. I was impressed by how much like a bride she looked. I wished I had flowers for her. I wasn’t really hung up on the good girl shit.

When the song ended, Panda patted the guy’s shoulders, gave him a kiss on the cheek, and headed in my direction.

Fadi was already looking uncomfortable. I knew he was going to leave once he was done taking care of business. I could find my own way home, and if not, Fadi would come back for me. That’s why we were friends. When Panda made it over, I reached out to put my hand around her waist and pull her toward me a little. Not too hard, but just affectionately, to show her I wanted her.

“I think I’m good for the night,” Panda said.

“Yep, lucky me. I’m ready to leave. Want to go chill somewhere? We can have some real drinks instead of this watered-down shit.”

Out of her money bag she pulled out this black spool of cloth. When she unrolled it, turned out it was a real thin black dress that reached almost to the floor. I watched as she pulled it over her head. It fell soft and wavy, where it should, on her body and we walked out the club together.

The cab came quick. Panda said she was a regular customer.

“You talk real cute, you know that? Where you from?” I asked her, as we got into the backseat.

“Here, but I left when I was like fourteen. I just came back to New Orleans like 6 months ago.”

“What about real by the one your mama gave you in the hospital?”

“My Mama is dead and I was born in a house, so there you have it.”

Usually, when I was with a girl, I didn’t ask many questions. This time I did and it brought something into the small space of the back of the cab that I hadn’t intended. I had blunt in my pocket, the driver seemed cool, so I asked him if it was okay to smoke. We were his last fare, he said, and as long as he could hit it, it was all good. I lit the blunt and the comforting odor made the air around the three of us lighter immediately.

“Where you all going again?” the driver asked.