An Azalea/Azaelia By Any Other Name Smells as Sweet? 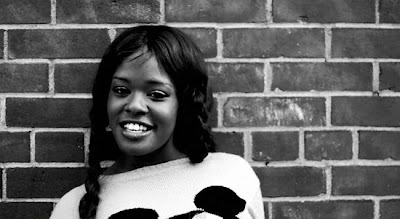 So I been loving on Azaelia Banks for a little while now. I love that vulgar lil' Young Rapunzel. American born black chick rocking the mic all over Europe, while just as in the days of Josephine Baker, Amerikkka ain't quite ready for her yet. I ain't been feeling the new white girl on the block, Iggy Azaelea, not quite as much. If any body missed Azaelia's beef  with Iggy over her "runaway slave master" comment in her rap, it's an interesting one to consider. 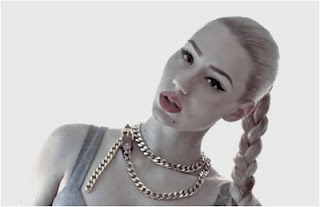 Far more interesting, in terms of its implications about the current culture of hip-hop, than the "to sing or not to sing" battle between Drake and Common. Some true hip-hop discourse about rap music charting its course and the battle for its soul, is being waged by these chicks, if you ask me.

T.I. who is executive-producing Iggy's album recently took to the airwaves to respond to Banks' objections to Iggy and defend her honor. Banks got on Twitter and summed up my thoughts regarding T.I.  perfectly...corny. It's a real long way from trappin' to yappin and nobody is scared anymore.

Before I get called an angry, bitter, black bitch for backing my girl Azaelia's comments, let me say this. Let the lil' girl get her money if people wish to consume. She has an " interesting" look, by interesting I mean, it;s the way black girls and chola girls been rockin' but it is visually provacative on a white body...I guess. So, whoever wants to ride with a white girl playing dress-up can. I'm just not and call me what you will.

If you want me to accept that a white girl from a small coastal town in Austrailia, practicing in the mirror, trying to sound like me, while staring at a Tupac poster till she got it down pat, is the "new classic", as she is referring to herself, I wont.

And a nigga like Tip can condescend all he wants, he may be fooling some with that annoying ass Father Knows Best act, but not me. I say that shit out of love believe me, because nobody was a bigger fan from I'm Serious to Paper Trail . But I keep it real for whatever that's worth in an age of digitally constructed realities. Shitting on a black girl that Europe is eating up for her wordplay, while hyping this YouTube sensation, this trick-poodle, with the voice and body of a black girl and the packaging of Pam Anderson, is I would say real real fake.

It seems most rap niggas are too pussy to call this type of shit out or too ignorant to care. But I do because hip-hop and black girls are important to me. Plus, I will always love a saucy bitch over one that just sits and nods, anyday no matter what color she is!

Check out the divinely vulgar "212" by Azaelia Banks below, as well as, "D.R.U.G.S". by Iggy Azalea for the lyric that started the beef....