Restoring the Way: Let Our Minds Be the Light

For a Church that sat by silent as thousands of children were abused on a global scale, they sure have a lot to say about women’s uteruses…
--->(My very pissed off facebook status from this afternoon.) 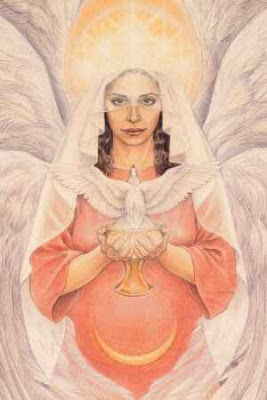 I left the Catholic Church a long time ago. While the mysticism and ritual that I was raised in still spoke to me, man-made fabrications surrounding gender, homosexuality and the like became too much for my soul and my conscious to bear. I knew that if I was to find God, I had to go outside, and see the world of belief that was out there beyond the walls of the Church.

What I found out there was freedom and love and life and the sure knowledge that the Creator, this Force that is greater than me, is also greater than the archaic “rules” of old, celibate, men and greater than Christianity, Catholicism or any other denomination that claims to have the sole rights to its name.

According to the Gospels it is women who stayed at the foot of the cross and women to whom the Resurrection was first revealed. Jesus spoke no words in the Gospels that advocated their exclusion from spiritual realm. I am reminded of Sojourner Truth’s quip to a misogynist, that if he was such a Christian, he’d know that men had nothing to do with Christ. That was God and a mortal woman’s doing.

I am not a Christian but I am calling on Christian women to reclaim their own theology. Two millennia‘s worth of bad translation and ulterior motive make it a necessary and revolutionary act.

The great French philosopher, Descartes said, “I think, therefore I am.”

This simple statement may be one of the most powerful realizations of mankind.

Our senses can fail us. We can see, taste, hear and smell in our dreams, yet none of it is reality. But our thoughts we know they are real, whether we are awake, dreaming or anywhere in between and that is how we know we exist.

We do exist and we do think. This is the greatest gifts endowed to us from this Force that is superior to us all. And because I think, I wonder.

What I have been wondering is how long do people remain loyal to an institution that doesn’t serve their interests? How long do you support an agenda that is very actively working against you? How do women that very wholeheartedly believe in birth control reconcile themselves with a faith that says determining how many times you get pregnant is a sin?

How do you square that against the fact that this is the same institution that failed to protect ,aided and abetted, and covered up the abuse of the children women bared under their faith's dictates? How long are you loyal to an institution that now stands in direct opposition to the humanity of women, who are its’ most loyal parishioners?

How long? How long before we realize that God doesn’t dwell in a house built on oppression? How long?

When do we stop being afraid to call bullshit on the bullshit that’s been made up over the years by men in secret rooms?

I say the time is now.

"By those who love her she is readily seen,

And found by those who look for her...
In every thought of theirs,
she comes to meet them."