That's All Folks: Sayonara Tim Tebow and Other Frauds 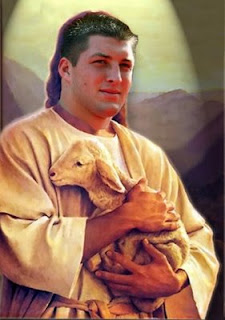 Black folk, we sho nuff love us some White Jesus, don't we?

Now to be fair, America loves him too, but watching my fellow brothers and sisters stan for this mofo is bit too much to bear. The only salve for my wounded heart after the Saints lost to the 49'rs was watching Tim Tebow get his ass handed to him by Tom Brady. Maybe now at least some of you "negroes" we'll see that God doesn't work for white-boys that drop to their knees for endorsement deals."Real" Christians are busy making quiet change in this world with their thoughts, words, and deeds, not  the posture they take before playing a game.

I guess the moral of last night's story is that God doesn't love his homophobic, racist, Focus on the Family son best of all. And that a mediocre quarterback is just that when put against a great one. And shouting Jesus' name million times for all the camera lenses to see ain't gonna change that fact or get you any special favors from the "man upstairs"...

I would venture to say that God has bigger fish to fry than the National Football League.

Black players and quarterbacks have been "playing black" and have damn sure not gotten the credit they deserve in the NFL. So just because an overrated white boy can say Jesus' more times in a sentence than your pastor, dosen't mean you have to support him.
I wonder sometimes if some people even read the Bible they thump so often in public? Doesn't seem like it to me. No doubt, the NFL has and is filled with Christian players. Why aren't they all "tebowing" (we used to have another word for it, I think it was "genuflect", but in the colonial tradition lets name it after Tim.)? Why aren't they all painting bible verses on their faces?

Maybe they checked out Matthew 6:5


"And when you pray, do not be like the hypocrites, for they love to pray standing in the synagogues and on the street corners to be seen by men. I tell you the truth, they have received their reward in full..."


Coming up on Martin Luther King Day, I pray for Black people that we learn the nuance of worship and how to approach God with love, instead of fear. Put more stock in action than pomp and circumstance. We been in this country hundreds of years at this point and we just can't let go of that missionary Christianity that was rammed down our throats.

But can't we stop swooning, at least, when white men "praise the lord"?

They jocking our fresh anyway....