Anyway Though...Sexual Trafficking Has to Go!!!! 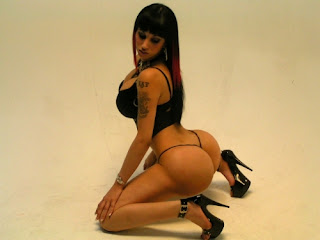 So if you follow me on Twitter, you may know that I follow the young woman pictured to my left. Andrea Hererra, a.k.a. Katt Stacks , notorious groupie and the thorn in the sides of all the men in hip-hop who had "dealings" with her. One of her most notable "victims" was Soulja Boy, whose crush on her and coke habit were exposed by Katt for the world to see.

We can talk for days about what a" hoe" she is,and the lives she ruins by exposing them and blah blah blah. But not on my blog. I'm just not the kind of broad that sheds tears over stuff like that.

But what I do cry about is the abuse women suffer in the sex industry.

Today is Human Trafficking Awareness Day. Human Trafficking, which is a pretty word for slavery, effects millions of men and women across the world. Girls and boys too young to tie their shoes are forced into labor and sexual servitude every day. It is a thirty-two billion dollar industry that we like to pretend dosen't exist or is a "choice" to participate in.

I watched an interview with Katt Stacks that was suppossed to be about getting beat up by some rapper's aunt for the video she made about he and his crew. The interviewer asked what he thought was going to be a simple question.

"Do you consider yourself a prostitute?" he asked.

"Prostitute, hoe, it's all the same to me. I been in this game since I was fourteen."

To this radio DJ's credit, he stopped the presses. Like whoa, this interview just changed. He went on to ask Katt, who is now locked up on an immigration violation, if that is common. Katt kind of laughed, like duh, nigga...where you been?

The interviewer asked Katt, besides money and exposure, what was the best part of making her videos? She told him that in the game, you're raised to shut the fuck-up, keep your eyes and face down and not say shit.  The best part is having a voice and being the perp instead of the victim for once.

Millions of underage girls are forced to sell their bodies for other men's profit every day. The kind of physical and psychological abuse perpetrated on these girls is unimaginable. I challenge these so called "real niggas" in the rap game, dope game, etc...to endure what some of these women have been through in their lives.

Women don't walk the track for the hell of it...and its damn sure not for sexual pleasure. The moralistic bullshit has to stop.

We live in a society that says you can be redeemed from anything except whoredom. Once you turn a trick, you're a hoe forever, so you might as well keep on, goes the old saying. So, once a child has child has been victimized , if they are lucky to make out the streets alive, we make shame a life-long condition.

Me for one, am tired of meeting women who could light an entire room up with their smiles and their humor, who bear the deep spiritual understanding that comes from suffering, have to live in fear of ending up dead in somebodies car trunk, or disfigured by their pimps.

It won't stop until we recognize that these women are our sisters, our friends and our daughters.

They are our children that are swooped up and beaten and manipulated and sold to the highest bidder. Until men decide to stop dividing women into categories, those you must respect and those that it is okay to abuse, and until women who have been lucky in life...lucky in that they are the one out four women who isn't sexually abused by adulthood, stop investing in this same thought process..... this sick cycle will continue.

We can't change this world, until we change our minds and decide to save ourselves. Maybe nobody can "save" Katt from herself at this point. But you can save your baby-girl from falling prey. And the way you do that is not by protecting her virginity at all costs, keeping her locked inside, and made fearful of the world.

Love, protection, stability and the knowledge that a woman is more than what is, and whose been between her legs.

We have heads and hearts too...