Niggas in the New Paris: The Throne Arrives in New Orleans 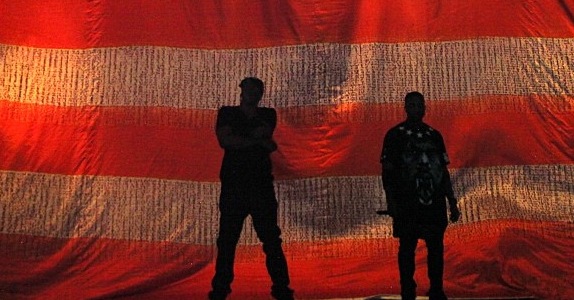 Cause they made us hate ourself and love they wealth....

Remember that one?
Remember that whole Kanye vs 50 Cent beef? Remember the niggas riding with 50?
What the fuck ever...
When Kanye dropped the "All Falls Down", Saturday night, I remembered being in college. Trudging through the day, tired as a motherfucker, with the feeling that I was being sold a dream just beginning to fuck with me. College Dropout  was an album that spoke to my frustrations, fears and most of all my dreams. Kanye with his leather kilt reminded me why he just might be my favorite artist of all time.
Not to be outdone,the consummate showman, Jigga Man defines what charisma is. Rapping acapella with just a spotlight and a smile,Jay-Z came on did his thing, and ripped it with his perfect pitch. Broke it down with those crisp,clear, images that only he delivers with such precision.
He's the best that ever did it...period.
I decided to go see Yeezy and Hov dressed as the serpent from the Garden of Eden. It seemed a fitting homage. In a moment of pure simpatico Jay and Kanye preformed "No Church in the Wild" with a montage of black people being baptized outside, Roman Catholic cardinals, and the KKK. Glad to see that I am not the only one for whom the connection between group think,Negro Christianity ( you know, "which would you like? This gun or this Bible?" version), and White Supremacy is all too clear.
If that makes me part of the Illuminati than I'll be damned before I'm blind.

I used to argue with people about religion, a lot. I don't any more and I accept that some may regard me as lost, but I stand firm that God is bigger than a box or a book, or the arrogance of humanity. Like, tell me you can't here the Jesus in Kanye's profanity?  Tell me, you don't feel something in your soul when you hear a drumbeat? I know you do and there's nothing biblical about that feeling, the one that compells you to move, its way more ancient.

The Times Picayune reviewer had this comment about that moment...

Without warning, the rappers went silent as Louis Armstrong’s “What a Wonderful World” accompanied a litany of disturbing video images: Hurricane Katrina damage, a Ku Klux Klan rally, fires, tornadoes. The set piece was meant to introduce “No Church in the Wild.” It also served as an unfortunate, ill-timed buzz kill, an awkward attempt to inject gravitas

Alas, there are many waters that cannot be bridged. However, there were plenty good Christians and a few white men in the building with their hands to the ceiling and we had a good ass time together.Smack dab in the middle of the New Empire where white men came --to Louisiana--to make their fortunes. We are the ones who survived and we march on to the beat.
I'm from where the beef is inevitable, Summertime's unforgettable
Say what...?
Definitely in my zone, 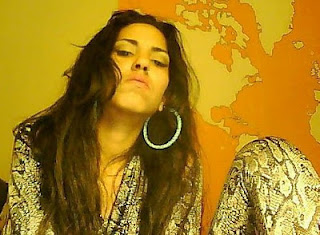 
P.S. Just cause I can't get the first seconds of this out my damn head after that concert! I would like to play this bitch whenever my friends and I go to a place with all white people in it...hilarious...