This is How I Look Without Make- Up: Out of the Dark with Mama's Gun, 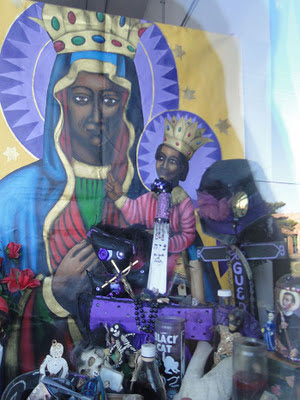 So this is how the weekend went...

I visited the New Orleans  Healing Center,took some good pictures, felt like I had a mini- spiritual awakening  in the Island of Salvation Botanica and then wrote and  attempted to submit to a blog, the worst article ever about it.

I am still striking the article from memory, as we speak.

I proceeded to critique a short story for class that contained the ghost of dead slaves and the verb "shuffle". Let's just say I wasn't amused. Maybe it's tacky to put a classmate on blast and Workshop is a sacred space and blah, blah, blah. But, fuck it, I'll be polite when I get there.

That was followed by some near tears over my feeling that my own writing is amounting to a lot of little bits and no one big thing. Makes me feel the unfamiliar feeling of an amateur.

Mix that with a little general discontent and you have the Gypsy in the dark, throwing a pity party, that could rival anything going on  in the street.

In  true New Orleans fashion, Sunday came, I went to a Saints Party,  and  got hella -fied drunk off Hennessy and my friend's rum punch. 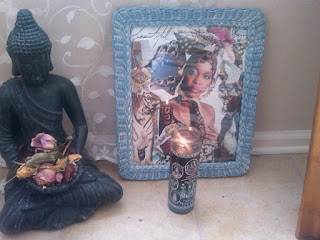 The Saints lost but really the weekend wasn't all bad. Or ever as bad as I had made out to be.

I did start work on my own mini altar and make a collage to the Patron Saint Badu.

I have been on that Mama's Gun again hard. That's what you call making moves with a broken heart. Erykah makes art for those that understand her, prays for those that don't and sticks her ass out [literally] at those who disparage her.

There were some things I didn't get done but I'll get around to them. I'm crossing them off my list one by one and getting it done.

On my time, at my own pace and I'm starting to catch up.

I guess what I'm saying is even though its Monday and it's a mess...relax, take your time, cut yourself some slack.

I'm trying to loosen my own cuffs as well.

So maybe I choked and wrote a terrible article, maybe I have low tolerance for people figuring out their place in the world, using my history as a backdrop. Maybe I am moody, unpredictable, sensitive and  insufficiently ladylike...

I'm alright with me, 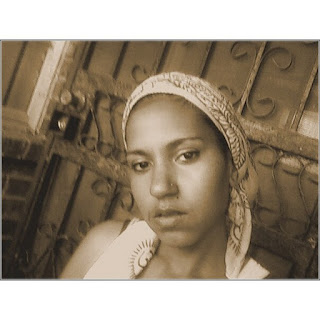 The YoungGypsyChild
Posted by Gypsy at 10:23 AM