Bro Q , The Golden Pistol and One Last Ride Through the Center of Town 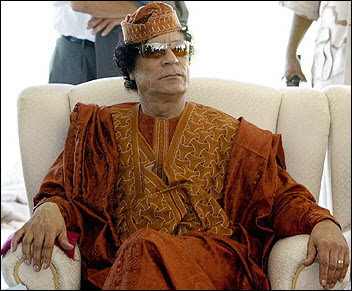 I remember waking up last Thursday to the "unconfirmed" reports of Muammar Qaddaffi's death. Next thing I knew, I was being bombarded with the graphic footage of  a bloodied Colonel Qaddaffi, being led through the streets of Sirte.  This was followed shortly by the video and images of Qaddafi being hoisted into an ambulance, layed out on a stretcher, with a bullet in his head.

I wondered then and today, what all the hubaloo was over  not releasing the Bin Laden photos? Especially, given that  I had basically, just witnessed all but the actual gun shots of a murder on network television.

I have been feeling a little discombobulated, lately. I've been writing fiction but not blogging, watching the news but not offering much by way of my own two cents. This general feeling of unease of mine, I can trace back to many sources right now. But while it may sound a bit over-dramatic of me, to say...I think the pictures of Qaddaffi with a bullet in his head have only exacerbated the problem.

I have had the misfortune to have been very near gunfire, a few times, in my day. All the local coverage of murders in New Orleans, witness killings, bullshit police press conferences, and executed former dictators has been causing me to relive those incidents, lately.

It hasn't been fun. Quite frankly, it puts me in a dark place.

The rebel fighter in the picture below, proudly shows off a solid gold pistol.  Reportedly recovered from Qaddafi, it serves as a  powerful symbol of everything many tribes hated about his rule. Brute, military strength and a wealth, they were excluded from attaining. 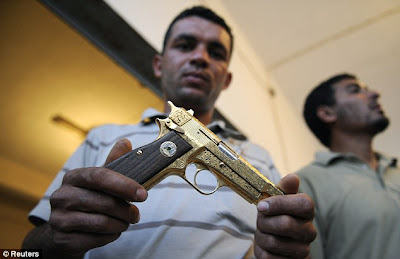 Unlike in the case of Saddam Hussein, who was ultimately hung, there will be no trial. Qaddaffi will never go before the Libyan people for justice. His captors have already exacted their version of it on the people's behalf.  We the international community were allowed to become the most macabre of voyeurs.

I don't think beyond his tribe and his children, there are many that mourn the loss of Moammar Qaddafi. But with reports of mass graves filled with both Qaddafi Loyalists, Black Libyans and Black African mercenaries I hope no one expects life without him to be pretty.

With "Old Fuzzhead" pulled from a drainage ditch, I expect that new doors for Western Imperialism have been re-opened in Libya . And  that the people still trying to free themselves in Syria and Bahrain and Yemen will continue to suffer and fight.

In New Orleans, they've locked up Telly Hankton, but I don't know anyone in the hood who feels "safer". I expect that true people's freedom, here in New Orleans and abroad is still a long way off. Despite what they tell us on TV.

It has been reported that among Qaddaffi's last words to his captors was this:

"'Do you know what is right or wrong?"

Staring at the pictures of this bloodied  man with a gun to his head, watching the coverage of Serpas' press conference loop around and around, and recalling the events from the past that I'd rather forget, I ask myself the very same thing every day.

The revolution will be no re-run brothers;

The revolution will be live.


Read more on the death of Qaddaffi @: http://www.dailymail.co.uk/news/article-2052178/GADDAFI-DEATH-VIDEO-Moment-Libyan-dictator-killed-bullet-head.html#ixzz1btzeBksf
Posted by Gypsy at 11:41 AM