These Rights are Declared to be Natural, Inherent, and Unalienable? 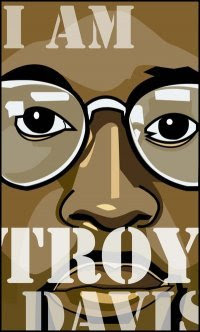 So it seems on the anniversary of the 1906 Race Riot in Atlanta,the state of Georgia seems determined to execute Troy Davis. Despite the fact that there is no murder weapon, no physical evidence, and nearly all the eyewittnesses have recanted their testimony--truth is appparently, unimportant.

Only the judge Penny Freesemann can revoke the death warrant, leave your honor a message urging her to do so at 912-652-7252.

So often, black people are told to: "move on" ,"get over it". We are often reminded of how long ago "all that" was.

In 1906 Atlanta newspapers ran stories about multiple white women being assaulted by black men. A white mob began to form...anywhere from 25 to 50 black people were reported killed. That these new stories were bogus but an afterthought.