The F Ain't for Fear : Feeling the Carter IV 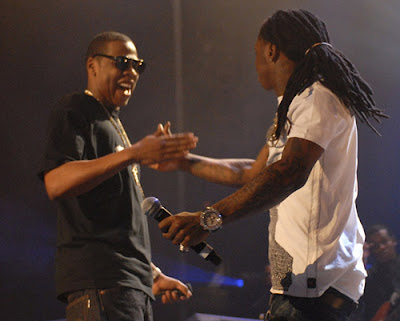 It seems my current muses, Wayne and Jay are beefing. Their respective CD's, The Carter IV and Watch the Throne, have been dominating my writing soundtrack, dualing for attention, in my one-disc-at-a-time DVD player. Their competing performances at the MTV Music Awards and seperate camps was the most old-school, award -show beef, in a minute.

Call me a sheep, but I love a little escapism from time to time.It was exciting. What could be better than Wayne's angry, disinterested look, as Kanye did his Otis scream? Or when Nicki stuck her neck out for her dude, calling Wayne the best rapper alive?

Both artists take me places. Wayne with his unhinged genius is a relentless MC, with an endless well to draw from. Anybody who manages to say that he's a "critical thinker" on the hook and make it sound jazzy, deserves kudos for creativity. Calling his metaphor, simile and pun game, infinite-- ain't even close to hyperbole at this point.

The critics were hard on this disc, but as a phenomenol writer friend reminded me,most critics don't dance to the music they review. Weezy definitely had my ass moving, he made me think, made me chuckle with his quirks. Not to mention his, at times, misguided and contradictory philosophy is fun to argue with. He's a charismatic man, that's been apparent since back in the day, when he was neighborhood superstar.

I love imagining my interview with him. I always envision that I'd be like, "Come on Weezy, let's take it back to pool parties in Lake Willow, when you used to be battling dudes at house parties, who are you really?"

I guess it's only natural that the best clash at the top. When the old guard isn't ready to turn the reigns of power over, the young and impatient get ideas of usurping it. After listening to the Carter IV, I can't help but find Wayne's attempt at a coup, by way of a Jay-Z diss[ by way of Beyonce as the kidnap victim], a bit shallow, obligatory and half-hearted. 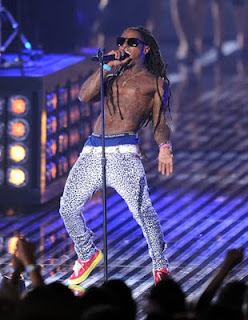 This isn't a comment on the disc as a whole, I actually, absolutely, love it. I also love Wayne--his drive, his journey-- and yes,even his jeggings.

I can't lie it bordered on emotional to see him close the MTV Awards. No matter what you think of his outfit or his "antics", that stage is long way from New Orleans-- East, Uptown, Downtown or otherwise. I remember being a little girl in the city, I had my bounce, like I had my Nas, like I had my Green Day, nice to see I wasn't alone.

I just hope the true story of his album being projected to sell almost a million copies in the first week, becomes the more compelling narrative to him rather than single bar fairytales about abducting famous women. After all,the truth is stranger than fiction and often times more intriguing.

Sleeping at the Top,

Live from the bottom [of da map]