Tales From the Hood:"She Who Makes Her Meaning Known" 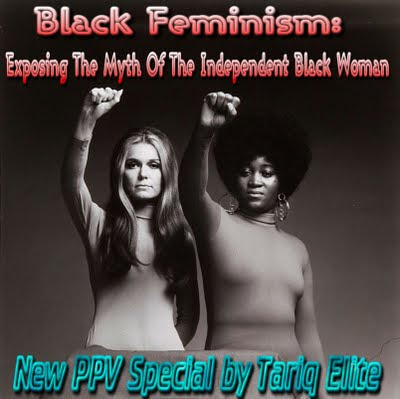 It's Feminism Fridays and I'm fired up, as usual. What's got me in a wad today is the resurgence of the popular urban myth that positions Feminism as a white supremacist plot to destroy the black family.

This anti-black feminist myth shares good company with the Illuminati as some of the most ahistorical,anti-intellectual bullshit moving. I mean seriously, these people on the internet, in the street, in my neighborhood propogating this nonsense to their gullible peers, need to get a grip on reality. And while their at it become scholars and students of history instead of pretending to be.

Brave women like Sojourner Truth and Anna Julia Cooper, who spoke and lived without fear for our benefit, will not be demeaned on my watch by ignorant, misguided, pseudo-intellectual do-gooders.


"Feminism is the idea that women should have political, social, sexual, intellectual and economic equality with men." How could you want anything else for yourself? For your mother, sister or daughter? What blinders are you wearing that prevents you from seeing that a depressed community will require full participation from all its members to save itself?

Dreams of a land of cocoa-colored Ozzies and Harriets isn't what's going to get us there. The theory that marriage can be used as the vehicle for black social mobility is fundamentally flawed. If we can put romance and the power of love to the side for just one second, we can be honest. Homes become broken or never become, because we are broken both emotionally and economically. This will persist and relationships will continue to fall apart until we understand our worth and the nature of human relationships in a new way.

Feminism isn't about women dominating men, however it does deny men the right to rule women. Its about an end to domination as the only way to craft human relationships. Black men need to understand one thing, gender supremacy is the root cause of all other forms of oppression. The notion that you can see half the human population,the closest relative men have on earth, as inferior and "to-be-dominated", opens the door for all the gradiations that follow.

Feminism is not about domination its about negotiatian.It's the right to be educated if you choose, it's equal pay for equal work,the right to vote, to own yourself.

Women are the first teachers, we are mothers, so say even the anti-feminists. Would not black children, boys and girls benefit from having their mothers be socially,politically and economically sound? If you do not understand that these are the women who make the strongest life partners, than your understanding of real love is false.

These women would raise girls and boys with the tools they need to survive in this world and provide for the families they create. This is what feminism can do for the black community.

So in the honor of

I speak your names in the name of TRUTH,