Summer of Love Part VII: The Sixth Anniversary of Katrina is the First With No Fear 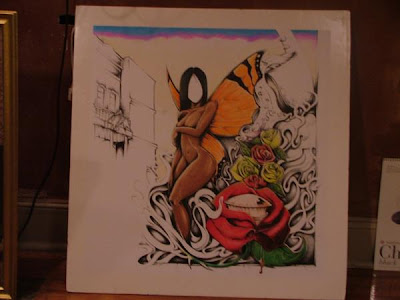 It was almost 4:00 am and I hadn't been to sleep yet. Frustrated, I decided to go outside--I had to do something with my body that had nothing to do with laying down. So I sat outside on the steps of my Burgundy St apartment and listened to the deathly still night. As I sat in the quiet, an army tank slinked up Elysian Fields Avenue, slowly, casually as if it were a sight that had always been.

Tears filled my eyes--I was home but still a long way from it.

Just a half a year earlier I had been a senior in college. I was right on the cusp, on the verge, I believed, of living the life I had envisioned for myself since I was eight years old. Back when, after being made fun of for being a spelling bee champ, I decided fuck them (my peers), I actually like school. Now I was a college dropout, without the Kanye West sized confidence or drive. I was working two jobs, eating my only meal of the day in the restaurant where I waited tables,I had two pairs of jeans,a pack of white tees-- my winter jacket had rips in it.

A lot of people said Katrina packed on the pounds but the year following, at five foot nine, I had withered to just barely 110 pounds. The life I had known was lost, the changes irrevocable, and any hope at crafting a new one seemed futile.

I let the tears fall freely, landing where they may, staining the steps below me. I pulled out a cigarette and lit it. Almost instantaneously, a white boy appeared from the alleyway along side my building.

"I'm sorry for scaring you miss. I'm Shorty.. you got a joe you can spare?"

I had three but I wasn't giving up any. I had no cash, wouldn't have none till I waited a table later on in the afternoon and I had no intention on niccin on Shorty's account.

I had never been so selfish or broke that I wouldn't share a cigarette.

"Come on Sis...You do coke? I got some rock I could spare..." he offered opening his hand to show me the yellowed pebbles he had pulled out of his pocket.

"Damn you must really want this cigarette...here nah leave me alone." I said handing Shorty one of my battered cigs.

Shorty obliged my request and ambled happily down Burgundy St, dissapearing into the chilly night air. I sat a bit dazed on my stoop. I didn't know what to be more taken aback by--the fact that Shorty had been willing to trade his crack for a cigarette or that it seemed plausible that I might want some.

Gazing at my rail-thin reflection in the passenger side window of a car abandoned on my street, I cried. I was far away from where I had come.

A couple days later , the street car now defunct, I caught the bus to St Charles Ave to attend a job fair. I left with a new job watching security cameras in a hotel, packed my shit, moved Uptown and left the Marigny and the girl skinny enough to be a crackhead behind. Six months after that and thirty pounds heavier, I re-enrolled at Xavier University.

I could only take one class at a time, and sometimes I had had to wait on my classmates, and sometimes rich girls laughed at me behind my back and sometimes the man I loved didn't understand...sometimes his work wasn't honest but it paid the bills.

Now five and a half years later I'm back in school again, working on another degree, still trying to "get-back-right" but progressing everyday. A very good friend once told me that "struggle is preperation for what's to come". That used to sound ominous to me, not anymore. Katrina, however bitterly the lesson was learned, taught me how to begin again without fear.

She showed me that you can do big things on a broken heart.

I look back at that year after Katrina, me and my son's dad, now passed on the world that is beyond ours and I think damn, we were so beautiful and bummy then. We received and made good on the universe's power to transform.

Every season in our life has a purpose no matter how dark. I used to think that was sentimental bullshit,now I know it's real. Every broken heart, every dissapointment, we follow one lead after another. What lies ahead is our future.

* "Metamorphosis" original and incomplte peice by Timothy McGary Jr. He drew that with all the love and transformation possible in one heart...Rest in soft peace.
Posted by Gypsy at 8:06 AM