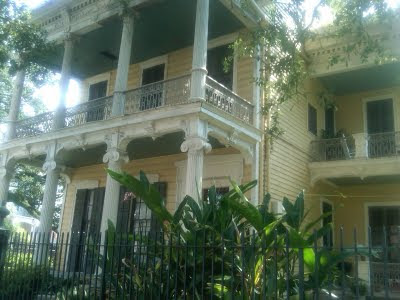 Since he passed away,whenever I'm Uptown I feel a force like gravity, that propels me toward the two apartments I lived in and shared with, Tim, my little boy's dad. The first one, in the 2900 block of Carondelet,sat up high on the third floor.The large, enclosed-porch provided a birds- eye- view of the neighborhood and the big hurricane windows made it an excellent greenhouse.

However,that was exactly what kept me shut out Saturday,and I was disapointed to the point of tears.It was almost as if I had expected to see myself--us-- sitting up there, feet kicked up on the glass. For a moment, I had believed I could walk right into my old life. If my former landlord had been home, I think, I might have asked her to go inside.

I sat there, a long time in the heat, wondering what I would have found inside.

Let down, yet odly satisfied,I continued my trek up Carondelet,the sun beating into my back, my whole body wringing wet. As I walked my old route to work, a couple horns beeped and I smiled at the familiar faces behind the wheel.

What I was doing Uptown was meeting with MelaNated, the collective of young writers of color in New Orleans, that I belong to. It felt good to be headed there,as I had been in need for some genuine communion. As a lapsed Catholic-almost Muslim-ancestor worshipping-pagan-animist enthusiast-Buddhist-- gathering with like minds is as close as I come to church, so I value their time a great deal.

MelaNated met at the McKenna Museum of African Art this weekend, and it's true, the winds move in circles. Sitting in that circle of writers, all trying to figure out our "way-in", I realized that I had reached the precise place where my old life, and the new one stretching out in front of me--met.

****
After having given up on entry into my old abode on Carondelet, I had crossed to the other side of St. Charles and found myself barrelling, on foot, toward Jackson Avenue in the hundred degree heat. Near fainting I finally stood outside the big,yellow, antebellum home that was Tim and I's second residence.

The whole walk, I had hoped that the lock on the front gate had not been repaired.It hadn't and I stood in the large yard,we had loved, feeling an emotion that could only be described as sublime. The grief still put me on my knees, but there was a welling since of gratitude that I couldn't deny. This was where Tim taught and I learned, the patience and beauty in bird-watching--how to contemplate life in a little bit of quiet.

This apartment was two blocks from the hotel on St. Charles Ave, where I worked,and three from the McKenna museum. Tim had been talking with the curator, working on some things, he was so eager to show them that he belonged on those walls. You could have found me lingering there, back in 07 ,smoking on the steps...waiting...

Love is a hoop, that's what the old ones say. It is a sacred circle that can never be broken.

I believe in what I'm doing, way down where I live now, on the other side of town. Saturday, I stood on the steps in my old neighborhood, and smiled with a group of people, I know are special. We are here, where much history has landed us, we carry the stories of the past in our palms and the future on our fingertips...

but Still fuck around Uptown,