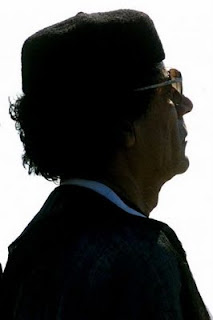 Cogantive Dissonance, the theory developed in 1957 by Leon Festinger, is just a fancy way to say, it sucks to feel two conflicting feelings about a person, place or thing,at once. I was re-reminded of this theory by a member of Melanated, the writing collective I belong to. She, as am I, as are many artists and intellectuals of color afflicted with our conflicting feelings.

The uprising in Libya and Western involvement in it has stirred my battling emotions over these last months. Now more than ever as the battle has reached a crescendo,and the Qadaffi regime fallen past the "tipping point". There is no doubt--NATO action in Libya reeks of Western dominance, imperialist and neo-colonialist intentions. And anyone simply ingesting the popular narrative of our goverment that this was a humanitarian intervention, needs their heads checked, a history book and the internet. 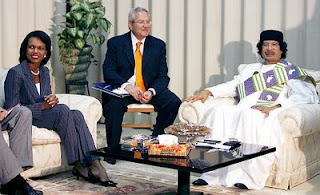 America and the West has a long,intricate and shady relationship with this fallen Libyan dictator. From the Lockerbie bombing and airstrikes in the eighties to a seat right along side Condie Rice, and nuke deals with Sarkozy in the past decade. That's quite a journey for one lifetime and more than enough evidence to let even the lay among us know, that there is far more to our intervention than meets the eye. Not to mention the atrocities being committed against civilians in Syria, Bahrain, and Yemen etc without any peeps from the international community about intervention.

There is a noble and necessary impulse in the black community to construct a narrative, counter to the popular one, fed to us through American media. This rebellious and revolutionary spirit, that still lives in the hearts of some of Louisiana's people is how I learned about things like the Haitian Revolution, that the biggest slave rebellion in North America happened up river from New Orleans (a fact curiously left out of grade school Louisiana History textbooks), that Nat Turner wasn't a homocidal maniac, the Black Panthers' takeover of the Desire Projects, COINTELPRO, Assata Shakur, the Osage St bombing, etc. etc.

However, what I have also noticed in some of these counter-narratives is that despite how rebellious, how "anti-Amerikkka" they can be, is that the critiquers themselves are still so uniquely American in their approach. We have an addiction to binaries in the United States, that even us revolutionary spirits cannot seem to shake.

People are either black or white. Gay or Straight . Christian or Atheists. And most importantly,there are Good Guys and Bad Guys.

In America whatever color we are, we have a tendency to either ignore history all together or we romanticize it. And there has been much romance around the Libyan uprising from all sides. In the black community we have a profound respect for storytelling and symbolism. So there is no doubt that for black militants, nationalists, pan-africanists and even some ordirnary folk, there is something evocative and emotionally satisfying in Col Qaddhafi as an archetype. 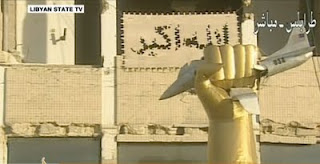 One must understand the optics of this man. Qaddhafi in his African garb, sharing close relationships with African leaders and his symbol, the golden fist, crushing a US fighter jet. It may be uncomfortable and even a bit incomprehensible for white America but this can be the powerful icognography of rebellion to a people, who have been and are so abused by this goverment.

A people who have seen our leaders killed, known men that did not come home during Jim Crow, women that carried the shame of abuse. But we as a people have to know better than to confuse symbology with the reality on the ground, whether it's here or in Libya.

I think it's important as Americans, Black Americans , that we take the stars out of our eyes. This world is complex, war and politics are ugly. We can engage in a fierce and rebellious critique of U.S. domestic and foreign policy without turning Qadhaffi into "The Prince of Libya" a la Davy Crockett, The First Thanksgiving and other such bullshit.

Two things are true in Libya: the West's interests in the people and land of Libya are far from humanitarian and Moammar Qadaffi has wished and committed evils upon his people.

There is no way to know exactly how much of the Libyan people's will is on the side of the rebels. I would suspect that if you ask, there is a healthy amount of desire on the part of the Libyan civillians for a life free of Qadhaffi, and an equal amount of fear of what lies after. There are neighborhoods where people are beginning to celebrate, there are loyalist holdouts. The enemy of my enemy is my friend seems to be the operative phrase. My heart is with the people of Libya, who I fear will be the losers of such a bargain.

A more sinister lesson maybe out there for other Middle Eastern autocrats--cooperation and/or disarmament with the West seems to spell the eventual death of your rule--a la Hosni Mubarak's cage.
So folks,lets not make fairy tales out of reality-- it's already frightening and ridiculous enough.
Posted by Gypsy at 7:54 AM