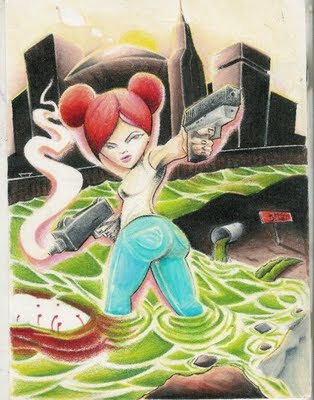 When I opened my jury summons in the mail, I was excited. To some this would mean lost wages and a tedious month of nothing, but for me this was a full-blown,"writer's vacation". Two days per week, for a month, I would have nothing to do but sit and write, while I waited for someone to call my name.

What I hadn't anticipated was how I would feel, when finally,they did.

Upon entering the courtroom, I felt a palpable sadness for every victim I had known. The knots in my stomach,were similar to the ones that I feel,every time I hear a loud, sudden noise, no matter how unlike a gunshot it sounds. There were thoughts of the select few people, I wish were rotting inside somebody's cell, and those, who I had been happy to see beat their charges.All and all I knew, I wasn't willing or fit to sit in judgement of the way things happen on the streets of New Orleans.

Growing up here,violence is an inextricable part of the coming of age process. By the time, and most times before we reach adulthood, violent crime and its net effects, have marked the lives of most of our friends and family. Victims and perpetrators, are often times cut from the same cloth. A lot of times you know them both--so justice is a funny concept here.

Who pays? The guilty, or, as a friend said, laughing sadly,the last man standing? Are those two things one and the same? Can't they sometimes be mutually exclusive?

Many people live outside of justice here, at least the legal system's version of it. Sometimes, I think my city,New Orleans, is as close to the Wild West as it gets. We come from a city, a country, that has treated the epidemic of violence in its urban communities, as "our problem". Therefore,our perspective on right and wrong, crime and punishment, has been unquestionably shaped by this reality.

Kenny Rogers has a song, The Gambler. Which due to its unexpected, yet profound applicability to life in the NO, was set to a bounce beat some years back. You got to know when to hold em/ know when to fold em/ Know when to walk-away/ know when to run.


That last part is tough for some, we all have known ones to die behind their pride. I've run a few times in my day,and I'm damn sure not ashamed to say. Once, I stood my ground and survived, but I'm certainly not trying to press my luck.

Some scores can't be settled or retribution found in a courthouse. In New Orleans, its a bust back thing and, justice is not for all. I received some sound advice this weekend...


*Original artwork by Timothy McGary Jr.
This may be hard for some people to hear, but this is what you call, no holds barred