She Ain't You : Deconstructing Kimberly Jones 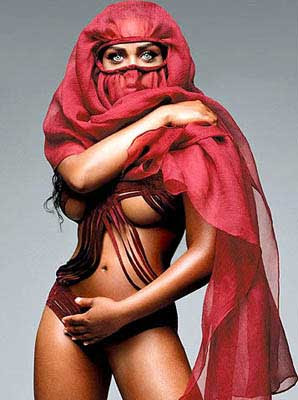 ******
I remember when this image of Kim first came out, it was on the cover, I believe of Russell Simmons', now defunct, One World, magazine. It set off a firestorm of controversy, mostly centered on how disrespectful the image was to Muslims and the Prophet Muhammad, {pbuh}.

I always thought this was one of the best photos of her ever taken. It speaks so powerfully to her story and to the story of many women out in this world. Our bodies so exposed, minds so acquiescent to patriarchy, that an open mouth is still closed, and even our rebellion is sometimes only undertaken at men's behest and crafted in their image.

This photograph is perfect, just perfect-- naked body and covered face. Who is she, really? Is the woman depicted complex or a hypocrite?

Listening to the snippet of "Tragedy" featuring Nicki Minaj, I winced at her harsh words for Lil'Kim.


While harsh, I couldn't help but agree with this current assessment of the dare-I-say, former, Queen of Hip-Hop.

Let's get one thing straight. I don't doubt Kim's ability, current material notwithstanding, for one moment. And believe me, I am waiting on the day that somebody does the right thing and gets behind her again. She could definitely give the streets another classic, Hardcore being the first.

But selling your mixtape for ten dollars on Pay-Pal is a far cry from that and frankly beneath a woman with one of the best flows ever. So is titling it, a literal parody, after a rival, whom you accuse of stealing your iconic style.

What better way could Kim acknowledge that the tables have turned, than by rapping on the beats of girl, who was rapping on Kim's, trying to get noticed, just six years ago?

If Nicki dethroned Kim, it’s because Kim lost her cool and bowed down.

Nobody can deny that Kim's talent, image and style broke the mold, and set the standard for female- rappers going forward. But image is where the similarities between she and her new rival end. Pink Friday is not Hardcore and that is obvious. The m.o. is different and thankfully so.

Through the years, Kim has told me everything with her music, except what I want to know. What I think women and girls really need to hear. Like how does it feel, really, carrying across states for men, when they get killed, go back to their wives, get you pregnant, go to jail.

How does it feel really when you take the mink and Chanel off? Like any woman who has loved a man in the game, or been a part of it herself, I know it ain't all getting your pussy ate and gifts. There are a lot of tears, whether you are his hoe or his wife, and I wish Kim would just be honest.

Even at thirteen, Kim and Foxy the only thing in my tape deck, I knew that while pussy could be power, it wasn't a sustainable mechanism for keeping it. And while I loved Kim like all the other little girls I knew, now, as a woman, I have to negate the pathos she put on wax.

Listening to Kim's music now, along with power, braggadocio, good times, and money, is also a tale of a lot of domestic and self-abuse.

It’s not just the men's lives that get grimy.

I wish she would talk about that on her own terms, not just as someone's ride or die bitch. What is it like to ride all the way to a cell, for niggas that folded, like towels, on you?

Who is she outside her relationship with Biggie, what would she have said, had she never met him?

In the meantime, I have Nicki, but I am patiently waiting on Kim's return. Let's just hope she can go bar for bar and not wig for wig with the new kid on the block.