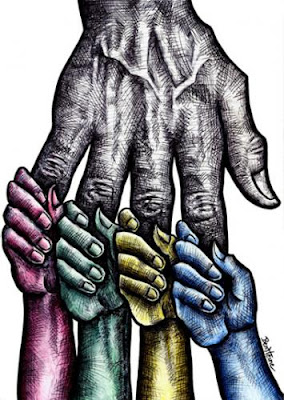 So, this began as a music blog.

Life in High Times, would allegedly be tightly focused on hip-hop, local shows, music reviews and the like, you know, keep it light. However, as the weeks have gone on, the focus of this blog has widened. I've never had a one track mind,but what I do have is a strong passion for social justice and I get regularly pissed off at the world around me.

What's got me pissed off lately, is that the humanity of all people is under attack in a major way."Mainstream" candidates [Republican] for the President of the United States signed a pledge recently, actually stating that African American children were better off duing slavery!

Sit back and ponder the implications of that for a second. Think about the gross insensitivity, ignorance, revisionist history,sense of supremacy and dominance, involved in the inception of a statement like that.

It makes me shudder, really.

It also makes me laugh when I think about all the ways my premise of writing about race has been criticized. While, the writing I've shared has been accepted by people of all races, even embraced, in a way that has been truly rewarding. I have also been told that writing about my experience of race is divisive and racist. And that my style and tone, creates an alienating experience for "good white people".

After I read that pledge, signed by Rick Santorum and Michelle Bachman, it made me wish I had actually flipped the bird at those, who offered that commentary,as I had been tempted to. I have a low tolerance for people who wail at pin pricks when I have to have the skin of an alligator just to walk out the door in the morning.Really, cry me a river, then get over it and do something to make a difference.If you really aren't a racist, then show it.

[Hint: The first way you can tell a person isn't a racist is that they don't get angry when people talk about racism! If you do, or find yourself getting defensive or red-faced you've got some looking in the mirror to do.]

You can't reject or claim not to be subject to an idealogy until you become aware of it and all the insidious ways its has shaped your conciousness. We are all products of our enviroments,that can't control the garbage force fed to us as children, but we are responsible for what we perpetuate as adults.

I used to walk around with a great hesitation when it came to writing about race, class and priviledge. I knew how some people would react, black and white. Did I have to be that girl?

But the answer is, Yes,Yes,Yes I do.I have sharp tounge, that's no doubt, and its not shuck, jive or sass. I'm not here to write kumbayah tales of how we can all make it together if we try, and that we're all in this together. There are some people, systems and behaviors that are the enemies of liberation and I'm not afraid to say that.


Agitator is bad word in the United States,but agitate, is exactly what I strive to do with my writing. Move people to action, even if that action is just a new thought. Afterall, the battle begins in our own minds.

There are no heroes, just hard,cold realities to this world and you can't be on the side of justice until you acknowledge them. You can't put an end to a preference or a privelidge or discrimination, as long as you choose to view the world through rose colored glasses, looking for absolution from guilt.

I have known no "good white folks" but plenty good people. And good people of all colors are what it takes to make this a more just and humane society for us all. I've said many times,to use an expression borrowed from my great-grandfather, "Its not the color its the kind."

He was right. What kind of person are you? Who do you stand in solidarity with? These are questions for us all.

"All we need is love"