The Politics of Victory 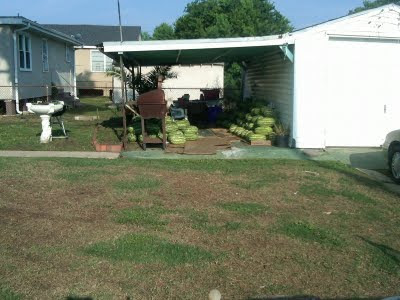 
"My politics are to win"–Melvin Van Peebles

Taking a morning walk around my neighborhood, I came upon the interesting site depicted in the photo above. Chuckling to myself, I immediately thought of Melvin Van Peebles'documentary,How to Eat Your Watermelon in White Company (and Enjoy it).The documentary explore's Van Peebles' career as well as the persistent tendency of black people to base their actions around what "white people" will think of them.

The sad fact is that you can't change a racist's mind. The psychosis that develops from years of seeing your fellow man as inferior is nearly impossible to penetrate. But what you can do is like poet and activist, Audre Lorde said, "define yourself for yourself".

How to Eat Your Watermelon in White Company (and Enjoy It):

A counter-narrative is crucial to the cause of freedom for any people who have been oppressed. Colonization begins in the mind, and the mass media is the most effective marketing tool for racism there is. The images we see and also the ones we don't see, take an enormous toll on black people's self-esteem.

Shame was what Van Peebles said he felt when leaving the movies. And while the images may have changed, the game hasn't. From the angry, finger-snapping black women that pepper reality tv to the supernatural powers of Will Smith in Bagger Vance.

Melvin gave us Sweetback and said...I'm gonna write my own rules and put my own story down...