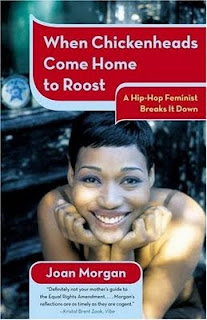 Its been twelve years since Joan Morgan's, When Chickenheads Come Home to Roost, was published. Morgan's book was the first work to articulate the position of a a "hip-hop feminist." And while much has stayed the same,much has changed in hip hop and popular culture, as a whole.

Womanism, as represented by Alice Walker, was my spiritual birth as a feminist. But I was born in 1983, after the Civil Rights and Black Power Movements, after the introduction of crack into urban communities, after the explosion of violence and after the birth of hip-hop. So,I have found, that Womanism cannot fully address my current concerns.

Joan began the conversation about the women of her generation,twelve years ago and I find myself hungry for a new, reinvigorated one, about gender and sexual politics in hip-hop.During a quick google search,I came across an interview with Joan, in which, she expresses a point of view that I would tend to agree with. At this point we know hip-hop is laden with misogyny, we've been there, done that, now what?

Morgan contends that the battle should now be fought on the front of "respectability politics". According to Morgan, respectability politics [a term I will borrow from her], keeps women sexually unfree, and silent-- with all expression of her sexuality,sacraficed on the altar of not being labeled, a "hoe". 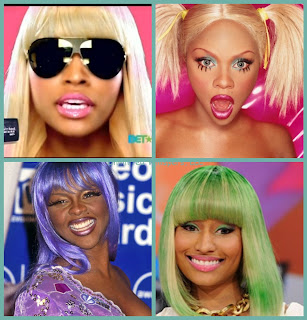 That is why Morgan finds, Nicki Minaj,as I do,to be very important to the discussion of hip-hop feminism. I would also agree that it is important to discuss her role in rap music, outside of comparrisons to Lil' Kim. Joan Morgan is right, Nicki Minaj, is not Lil Kim, a point best illustrated by listening to their respective debut albums, Hardcore and Pink Friday, track for track.Outside of aesthetics,in fact, the two rappers couldn't be more diametrically oppossed. While Lil' Kim suceeded in giving us a lovable anti-hero, teaching us, that its better being a rich whore, than a broke virgin; I would contend that no female in hip-hop has done more to challenge the foundation of respectability politics, than Nicki Minaj.

Respectability politics say that women, particularly, female emcees, can exist in only two categories: conscious and coochie popping. For example, you are either a Lauryn Hill, a Queen Latifah, Missy or MC Lyte, marketed and embraced, based on your skills, creativity,elevated consciousness, or your rough and tumble quality, that makes you almost one of the boys.

These rappers were not meant to be sex-symbols in the traditional sense, their intelligence didn't allow for it. OR you are a Foxy Brown, Lil' Kim or Trina, where your sexuality is the driving force, the factor, which your entire act hinges upon. In these women's cases their intelligence could never be truly showcased, as their "assets" prevented that. The only other female rapper that I can think of with popular sucess outside this binary is Eve. But where has she been?

Nicki Minaj has managed to challenge respectability politics on almost every front. These politics dictate, that in order to have something to say that is valuable, a woman must present complete sexual propriety ,must not have any identifiable "bimbo/bopper/ or hoe-like qualities, in terms of speech or dress, and must above all show "respect".

Clearly this allegiance to "respect" went out the window with the Kim beef. And in my opinion, rightfully so. Lil' Kim used to spit bars about pussy, dick and designer clothing, she didn't march for Nicki Minaj's freedom. So at the end of the day, what does she really owe her? Do we expect Drake, J. Cole or Wayne to pay the same type of public homage to Jay-Z? 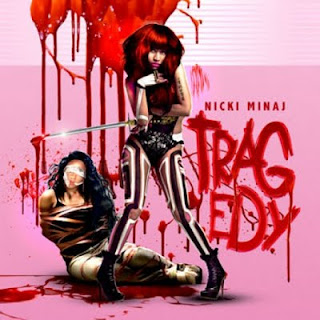 No, the boys just get to make music together because there is room for all of them to shine.

Nicki has put sexuality both front and center in her music, while taking the objectification of it, off the table. During her mixtape days, when her lyrics were very sexually explicit, Minaj has said that, she and those behind her, believed very much in the model of nineties. Meaning, if you have titties, a weave and big-ass booty, then you're coming out Lil'Kim style. Now, Nicki raps about her dreams and fantasies;showing that you can do more with a fat ass, than hit the pole or cover it up, pretending to be Nefertitti or Rita Marley.

Much has also been made over her flirtation with sexual orientation. I've heard backlash from all sides. With some outright condemming her identification with the gay community from the perspective of "immorality",with others questioning the veracity of her claims. Is it okay to flirt with the perception of bisexuality if you're straight? What is the purpose and is it valuable?

I would contend that it is both okay and extremely valuable in the arena of identity politics and gender equality. From a practical standpoint, Minaj has huge appeal and sucess in the LGBT community, so setting herself up as a potential member of this community is personally beneficial to Minaj. But on a broader sense this is why even a "stage" lady-lover is important to female liberation. 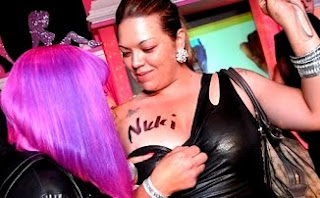 Traditionally, women who defy or live outside of male dominance, have been labeled as one of two things: whores or dykes, and sometimes both at once. Minaj's flirtation with bisexuality in her public persona, is a rebellious act-- putting forth a female body, that is very desirable to men, that cannot, however, be fully controlled or satisfied by them.

A woman with a body, that is not solely, a man's domain, cannot be a dog to kick, a rider or his down ass bitch. Nor can she be his housekeeper, assistant or mere member of his entourage. A woman whose body exists outside of the ownership of men, has no choice but to be her own boss.

Minaj has created, in the body of a video vixen,a perspective totally outside of the male-centered,heterosexism that dominates our society and hip-hop. One need look no farther than the boob signing that began organically and is now the hallmark of her act. And don't forget the Ken Barbs, Lil' Kim definitely loves and is loved by the gay community. But Nicki Minaj was the first major rap artist to make them a part of their brand.

There are legitamate points of critique to level at Ms. Minaj herself, no doubt about that. But like her or not,Nicki Minaj, being one of the biggest stars in rap music,means a lot in for the discussion of women in hip-hop. How do we take her stardom and sucess and extract it from the next talented young woman looking for a deal? How do we get to the point that our culture will support several, differing, female stars at once? How can we shape an effective conversation with intelligent brothers like Killer Mike,who think that there is a deficiency in hip-hop just because one of its biggest stars is a woman?

It may sound ridiculous, but a woman signing titties,just might be a start.

Kim and Nicki in happier times... 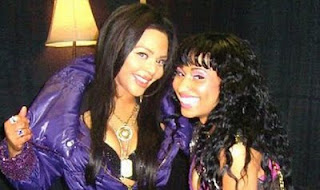