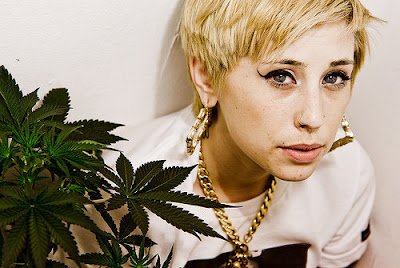 So I decided to space out last night, you know hit the clouds. And while I was at it, I finally checked out this White Girl Mob shit. I've been reading the blogs and following the controversy surrounding her Mob member, V-Nasty's free use of nigger in her lyrics. But I had yet to actually listen to any of the music behind all the hype.

Maybe from up high the view looks different, but I found myself confessing to my most militant insides, that I found this little girl oddly endearing, posessing a certain,genuine, talent and a sense of humor. She is also a loud mouth little bitch, with a point to prove. The preservation of that kind of spunk past adolescence has to admired in a girl when most girls become snores on the altar of male approval by Kreayshawn's ripe old age of 21.

What I wish is, that she stuck to her too-cool for school, urban white girl, make art and smoke weed, cut-up and rage vibe, because that, I think, is authentic. More Amy Winehouse when she was clean and less wiggerette. East Oakland or not Kreayshawn needs to lose the dope and guns in her rhymes.We don't believe you, we need more people. For real. 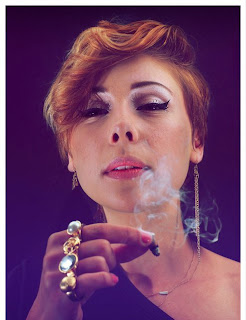 While I do like her fusion of pop with Oakland- Bay Area beats, as a brown girl that's been rocking headscarves and heavy eye-liner out the womb, its no secret that this is "BoDerek braids" all over again. It's not lost on me that her you-tube to Columbia records story has much to do with the novelty of her whiteness.But that's the way this business works, it's all about who has got that new thing. And Kreayshawn does have talent, whether or not that can turn into record sales is another matter.

As for V-Nasty,its her use of the nigger that's causing all the controversy, Kreayshawn likes to point out. I feel this way:

Growing up in New Orleans I knew a some V-Nasties.One white girl, a white boy and a couple of Palestinians that lived in and amongst black people, in similar socio-economic circumstances, that talked the talk of black people, including the word nigger.

From all accounts V-Nasty had a pretty rocky upbringing,but whatever points are earned for being a product of your enviroment, lose steam once they hit national stage. If this is, indeed, how it goes down in the Bay with the kids, what V-Nasty, and especially Kreayshawn need to realize is that they're not in Kansas anymore.

Meaning once you leave your little bubble, your slice of the white girl in East Oakland pie,you enter the real world, where you're face just isn't your face and the earrings in your ears, and the words coming out of your mouth mean something. What plays in Bay Area youth culture has another realm of context to be placed in once it leaves the neighborhood. Bearing the whole of our racial- social critique,maybe a little undue burden for the little ragers to bear, but that's the reality.

With the likes of Snoop and Drake taking notice of her, Kreayshawn is no doubt getting her chance to shine. Justly earned or not, one can only make the most of oppurtunity, hope she knows: