--Kathryn's Stockett writing the dialogue to her meeting and "discovering" my talent.

****
I have a mission,several actually, but [one] of my current soap-box issues is this god damn movie, The Help. I absolutely abhor the attention this bullshit is receiving. Even as I sit, working on this post, the woman next to me is reading it! I really loathe its existence and the sucess of a writer like Kathryn Stockett. 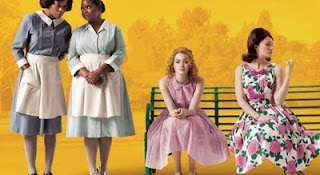 Some would say that my opinion is harsh,given it is of someone I don't know. I would say the moment when Aibileen compares her skin color to that of a cockroach, is equally rough and an even greater instance of someone making assumptions about someone,a societal position, she doesn't have a clue about.

For the record, I have known many black people, even those with a self-loathing toward their skin color, and they would never, ever, compare their complexion to a roach's.

"Black cockroaches" is,however, an insult, that I remember(vividly) being called, along with my classmates, when we arrived to play a volleyball against a Lakeview [predominantly white New Orleans neighborhood]Catholic school, in the late nineties.

A little projecting on Stockett's part I'd say.

Aibileen also doles out such advice as, "don't drink coffee, you'll turn colored." And there are Skeeter's gems, how many times does she have to tell us how black someone is? As in, "black as night, asphalt or so black, she couldn't tell them apart."

Is she kidding me?

Unfortunately, she is not and neither is Hollywood, nor are the astronomical book sales, that have led to this movie to star the likes of Viola Davis, a joke. It has been nice while trolling the internet to see that I am not alone. Many people share my utter disgust at the journey of this project from print to film.

Kathryn Stockett, ripped off the stories of black women, a real lady named Aibileen in particular, and retold it in her version of black talk. Stockett's book is a coon-shouting, exploitation of a very painful history.From the fictional "Aibileen",who just bares the pain of her niggerness in quiet dignity, to the back talking, sassy Minny Jackson, The Help is a gem for the good white people of America, nostalgic for days gone by.

Why do I say for white people?

The movie and book's title hit the nail on the head."The Help," sets black people as the subjects and objects of this story, and whites as the assumed ears and eyes of the audience. It is clear down to the savior the women receive by way of Ms. Skeeter, who this movie is for and who it is suppossed to reach and uplift. There is a nostalgia for this time period,a thirst that is seemingly insatiable in white America, for the age of exalted Southernhood and black domestics. Don't take my word for it, check the book sales.

In 2011, when the sitting President of the United States is a black man and his wife, Michelle Obama, was pulling in a six-figure salary before leaving for the campaign trail, is the only leading role for a black actress is still, a fucking mammy?

Apparently, the answer to that question is yes. Viola Davis put it this way,

"What do you do as an actor if one of the most multi-facted roles you've ever been given is as a maid in 1962 Mississippi?"

Her answer is play the part, but her question is the problem. Why is it that this is the only multifaceted, suppossedly round portayls available to her? I think its because people prefer things the way they were or at least in these uncertain times, like to be reminded of them. But also be reminded of a fantasy, in which, brave, ballsy, little, white girls from Ole Miss were on the side of their black maids. A world where white girls had an imaginary sisterhood with black women.

I for one couldn't imagine the horror of walking out of the movie theatre, surrounded by hoards of well meaning white women, looking lovingly upon me, as their "former help". I would suggest they keep the patronizing smiles and misplaced sympathy to a minimum, if that day should come. 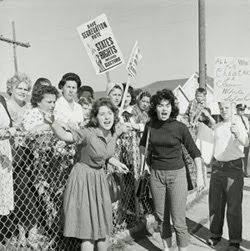 I don't doubt Viola will deliver an excellent performance. I smell an Oscar nom, or at least a Golden Globe. From Gone With the Wind to Corrina Corrina,black women have mostly received Acadamey recognition for playing maids. And forget Halle Berry cause she had to get fucked by Billy Bob Thorton, drunk off some cheap-ass whiskey and fresh off beating her son's ass for hers. 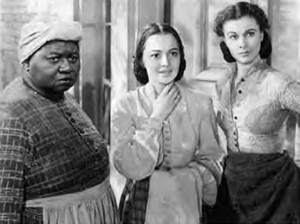 Davis can rationalize playing mammy all the she wants, but whether its Mammy in HD or Hattie McDaniel in technicolor, it really hasn't changed much. I mean, did she read this book? From no count black men to its imaginary version of coon talk , it is a putrid,caricature of the black men and women, who lived and suffered the brutality of the time. In the age of Michelle Obama, Abileen, is a not so subtle reminder of our "place" in history and the popular imagination of white America.

Black women's stories do deserve to be told, but it would be nice if we got the pleasure of telling them, in our real voices, not how white ladies perceive us to sound.

Stockett, in my opinion, is as unscrupulous as they come. How can you in good conscience profit off centuries of another group's pain? You can't,you just cash checks. So I won't be adding any cents or credibility to what Stockett is taking home. I'll see The Help, when it comes to the bootleg man near me.

Or maybe I will go to the movies, I love a good, righteous, confrontation. I've been called an agitator before by good white folks,maybe this time I will be and label myself for a change.

Pleez and thank ya suh,

I can't tell you what to do people, so here it is, coming to the theatre near you.
Posted by Gypsy at 12:21 PM