Breaking Up is Hard to Do:Feminism Fridays

I was just ten years old when Sista Souljah ignited a firestorm in 1992 with her comments,

It was these comments which prompted Bill Clinton to equate her with hate-monger, David Duke.I still admire the balls it took to make such a biting commentary on black on black crime and society’s lack of concern with the alarming rate, at which, black youth are murdered in this country.

I had the feelings of a little feminist, but I definitely lacked the experience, mental framework, vocabulary and voice to express myself. Already I was struggling with this notion that little girls, women even, should be seen and not heard.

Sister Souljah was young, black, fearless and definitely being heard. This is the woman that inspired me into adulthood until I revisited her early work, No Disrespect, and listened to some of her recent comments regarding her latest work, Midnight and the Meaning of Love. 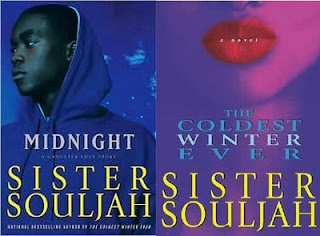 Sista Soulja's seminal work, The Coldest Winter Ever, was so-called, “urban-literature”, at its finest. The novel featured black characters that were three- dimensional and a plot line that goes a bit deeper than that of your average music video.I am eternally grateful to Sister Souljah for exposing that there is struggle and pain in the hood and stories that need to be told.

Winter Santiaga and Midnight are two of the most complex and memorable cult-characters to emerge in African-American popular -culture in recent memory. Midnight’s character is so compelling and beautiful, I was not surprised, nor do I begrudge, Sister Souljah for continuing his story onward.

But as much as I hate to say it, my Sister, Souljah, is on some other shit….

It’s not the writing, nor her fierce imagination, I would challenge. Rather, it is the critique that she uses Midnight,as a conduit to launch, that I take issue with.

I tend to agree with a lot of Sister Souljah’s assessment of the pitiful state of black, male/female relationships. I also agree that no one, including those Negroes who call themselves a part of the solution, has done much to address what black youth are experiencing on the street –level. But her conclusion that we somehow arrive at a more stable community, as fulfilled African people, through this man-sharing, patriarchal, half-a-Islamist solution, is where we defer.

How did the fierce girl spitting fire to these men’s grills get to this place?

I don’t know, but I hope she finds her way home because we're waiting for her...


Damn this is the Sister Soulja,that made me breathe...(Courtesy of the Isis Paperz on YouTube...check her out...you may not always agree with her but she will make you think)
Posted by Gypsy at 12:00 AM