"Respect is Just the Minimum" 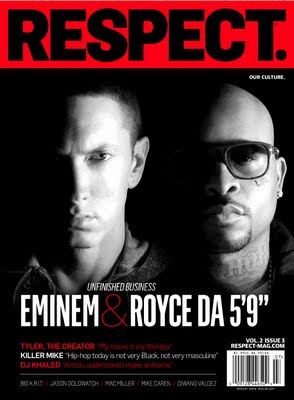 ***
"Hip-hop is not very black or masculine these days...niggas used to grab their dicks on stage, now Nicki Minaj is."- Killer Mike

***
This is when intelligent men and the interviewers really begin to piss me off. Why isn't there someone writing in print that would challenge a statement like that? Especially,when this theory is somehow, inextricably, linked to the lack of entrepreneurship in the black community.

That’s the kind of pseudo-intellectual bullshit being kicked by men all around the hood near you. People lap it up, eager for any explanation as to why things are, what they are, for a lot of us trying to make it-- or God forbid, "come-up".

I've been told that I focus on the wrong things by many men. My answer to that has always been that they let too many things go over their heads. Why does Killer Mike see a deficiency in hip-hop, based on his false,(in my opinion), perception that it isn't very masculine?

Why is femininity considered the inferior of the two expressions of gender? Why is one of the biggest insults to be called a woman or worse yet a pussy? When we all know how great it is? Why, in our community when women were the ones who raised us?

***
Then to Respect magazine:

I respect this publication for choosing to present hip-hop for its artistic content instead of exploiting it.

But I was disappointed because I saw only a few photos with women in them at all. Because Respect doesn’t choose to go the route of King or even XXL [which is not explicitly a men's magazine] with its Eye Candy--does that mean we have to be invisible all together?

Is that really the only way we can understand the dynamic between men and women?

***
Killer Mike's message of promoting black people to take ownership of their communities is a powerful and useful message.

Why can't we own any of the corner-stores in the neighborhoods we live in?

Like Killer Mike says rightly, even if you generating only a couple grand a month, realistically, a lotta people ain't making that much working for another motherfucker...