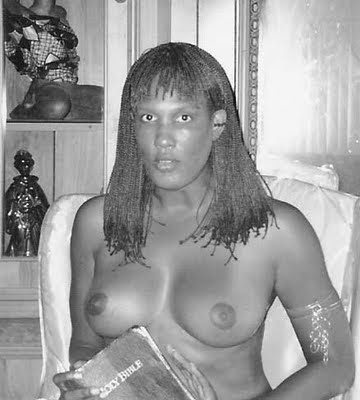 A couple weeks ago,Sudanese–born author,former captive-mistress of Osama bin Laden, and agent provocateur, Kola Boof attacked rapper, Wale with such a ferocity— I am still thinking about it. The rant came on the cusp of the publication of her latest novel,The Sexy Part of the Bible, which deals, in part, with skin-bleaching in West Africa.

Kola’s use of the term “niggerstock” in her rant, to describe Wale and the mentality of self-hating blacks,ruffled the American sensibilities of many black people. But it is Kola's job to provoke and that she did by raising valid points in her sparring with Wale.

The fact that @wale is Nigerian makes it all the worse, because he’s setting the wrong example globally for our race. A loser. There wasn’t a single Black woman in ‘Pretty Girls’…so what in the f-ck was he saying about African women?? His own race? @wale and all the rest of these Self-hating Niggerstock Bastards don’t celebrate Black Beauty bec. they can’t C it”

Why wouldn’t NIGERIAN children want to bleach their skin afte watching a WALE video?? How could they not? Think about the IMAGES in Wale’s videos….and then look at why Nigerian kids, both male & female, want to skin bleach. HIS VIDEOS!! partly. Just remember….that KOLA will kick your f—ing a– @WALE

Many people have taken issue with Kola’s assertion that there were no black women in “Pretty Girls”. In the eyes of many black Americans this is simply untrue, there are, they’re just light- skinned. However, what Ms. Boof would have us understand, is that our concept of blackness in America has been informed not by Africa but by white supremacy. The one-drop rule was created to keep people enslaved, even those fathered by the owning class.

I recently had a conversation with a “white” friend during which she informed me that her grandmother had been a full-blood American Indian. This fact, however,has no bearing on her current racial identity as a white woman or the way she is viewed by society as a whole. Had her grandmother been black instead, no matter if she looked exactly as she does today, upon that revelation – she would be deemed “black” by society.

Kola Boof rejects the one drop rule and the notion that you can represent blackness with a picture of Beyonce, Alicia Keys, Halle Berry or any other light-skinned or biracial woman. Her concern seems to lie not with building up our numbers by including anybody with one drop of black blood but in strengthening our core. Black is beautiful and we don’t acknowledge that by paying homage to white supremacist ideology such as the one drop rule.

Wale has come out in defense of himself by partially acknowledging Kola’s point. The women for the “Pretty Girls” video were chosen by a casting director and he was not totally pleased with the outcome of the video. He also contends that in his video “Sweetie” he made sure that this did not happen again.He also, offers his song, “Shades”, as evidence to his feelings about black women.

While some may take issue with Kola’s method of asserting herself on this subject you cannot deny her rage. Take this quote:

"My desire to slit the throats of everyone in my path...is the rage that Black women the world over suppress on a daily basis.That is the core from which I write."

And I always respect, a bitch willing to go hard...

Ouch…videos below… plus more information on Kola Boof from her perspective...

In her own words...pardon the visual distortion...

It has been since confirmed that Kola Boof was truthful in her assertion that she had a sexual relationship with Osama bin Laden...she remains unable to leave the United States beacause of this association..she maintains that the relationship began against her will...
Posted by Gypsy at 10:16 PM