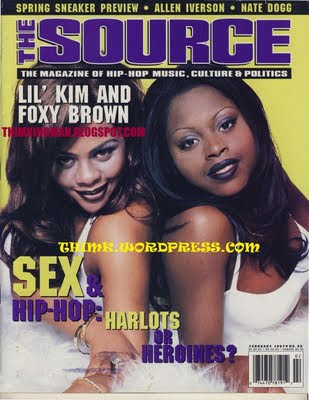 February 1997 issue of Source (lord knows I remember when this was taken away from me in Religion class...)

***
I was taken this week with the article, “The Diary of Kimberley Jones”, appearing in the June issue of Vibe magazine. Lil’Kim is a fascinating figure and I was excited to see someone writing about her, without her current beef with Nicki Minaj, playing in the foreground.I did gain some major insights into my perception of Kim's urban legend,but I was disappointed by the cacophony of exclusively, male voices, offering their two-cents about what Lil Kim has meant for females in hip-hop.

Also included in this month’s issue of Vibe, was a small snippet commemorating Foxy Brown’s crotch grabbing cover in 1998. 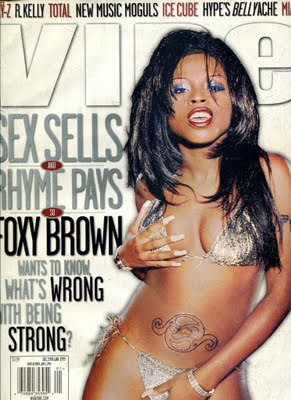 As a result, I’m working on my own “Deconstructing Kimberley Jones and Inga Marchand” pieces (look for that soon).

***
I was a little girl who bought the Hardcore and Il Na Na albums at thirteen and came of age in an era where “sex sells” was almost the only way to be a female in the rap game. The nineties were an uncharted time in terms of hip-hop; it had not yet, so completely, become a part of popular culture. Jay-Z was still far from sitting on a project bench with Oprah, no matter how much money he had earned.

We forget how young these girls were when they stepped on the scene. Foxy was just sixteen years old when she appeared on the “I Shot Ya” remix featuring Keith Murray, LL Cool J, Prodigy and Fat Joe. It’s hard to imagine such a young girl being able to spit the lines “sexing raw dog without protection/disease infested” in this day and age, with our 24 hour news cycle and rappers appearing on Bill O’Reilly almost regularly. And don’t forget, Lil Kim was not much older when “Player’s Anthem” dropped.

I will let you all ponder that while I keep writing…

Sidebar:
Questionable message not withstanding, this is one of the best flows ever put down by a female…yet to be topped in my opinion…


God damn…the girls used to go hard on that beef shit…skip through CNN..Fox was the only reason to listen to that song.

Quiet Storm Remix Feat Lil Kim
Legend has it she put this down on the first shot...wrote it in a couple minutes. Stick with your first mind, hanh?